Only the tears of ten thousand weeping angels could cause such a deluge! And, come to think of it, maybe that is exactly what it was…

A Contract With God

Through a quartet of four interwoven stories, A Contract With God expresses the joy, exuberance, tragedy, and drama of life on the mythical Dropsie Avenue in the Bronx. This is the legendary book that launched a new art form and reaffirmed Will Eisner as one of the great pioneers of American graphics.

Imagine a world without graphic novels, a world without Watchmen, Persepolis, the illustrated stories of Alison Bechdel, of Frank Miller and Neil Gaiman. Amazingly that time existed, and not all that long ago- less than 40 years. Published in 1978, A 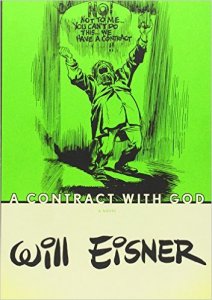 Contract With God is heralded as one of the very first graphic novels, if not the first, a comic that proved the medium was able to tell mature, long form stories within an illustrated format.

Before piecing this experiment together Will Eisner had already made a name for himself in the comics industry, creating and working on The Spirit during a large chunk of the 20th century. When A Contract With God was conceived, he based the stories around those he had witnessed during his own depression-era childhood in New York.

With an arsenal of experiences to draw from, Eisner crafted four stories that looked into the lives of the Dropsie Avenue tenement residents. They are not supernatural, or really in any way fantastic- they are just stories of average people getting by through life, tragedy, and temptation. (I should point out that these stories are not child friendly; I’m always amazed at the people who still insist that comic books are for children only, but these stories are rife with nudity and profanity, so don’t just assume!)

Because the graphic novel format was so new, this work doesn’t look like you might expect it to if you have experience with the medium. Rather than panels and boxed off lettering, Eisner often employs a single image per page to tell a story, weaving the text around the black and white depictions. It create an unambiguous focal point for each section of the tale. Even though the stories are set during the Great Depression, they are about universal human themes. Additionally, the characters involved are both tragic and compelling, despite their limited story lengths.

Will Eisner continued to create graphic novels until his death in 2005 at the age of 87, including two follow ups to A Contract With God. And if his name is finally starting to sound familiar to you, it might be because the Comic Industry’s top awards were named after him in 1988. Each year Eisner Awards are handed out to the best writers, artists, and productions in the medium.

If you’re looking for a quick read with great stories and a place in graphic novel history, snag a copy of A Contract With God. It will be well worth your time.

3 thoughts on “Review : A Contract With God”