Empires do not suffer emptiness of purpose at the time of their creation. It is when they have become established that aims are lost and replaced by vague ritual.

This second installment explores new developments on the desert planet Arrakis, with its intricate social order and its strange threatening environment. Dune Messiah picks up the story of the man known as Muad’dib, heir to a power unimaginable, bringing to fruition an ambition of unparalleled scale: the centuries-old scheme to create a superbeing who reigns not in the heavens but among men. But the question is: Do all paths of glory lead to the grave?

Dune Messiah was an interesting little read, but perhaps I’m jumping the gun by even reviewing it before reading Children of Dune, because it certainly felt like a story in transition. 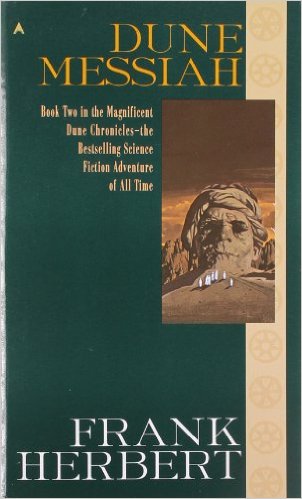 Where the first book built a strange and hostile world surrounded by a conniving government plot, the second iteration of the series sets its focus firmly on the empire Paul has built, and look at his turmoil over being seen as both an emperor and a God. Like the first book, there is a great deal of philosophizing going on – about Paul Muad’dib’s powers, and those of his sister Alia, about the role of religion, and the balancing of different factions and cultures and whether or not this conquest he has started can ever stop. It’s more interesting than it sounds, with various plots and machinations coming from both outside and within.

Dune Messiah did a nice job at showing the aftermath of the first novel’s war, and setting it over a decade later was an effective time jump to show just how much had changed. Yet… it doesn’t feel complete. Dune Messiah tells a full enough story, but at the same time it is clearly a set up to something larger. I feel like it probably could’ve been the first part to a longer book, rather than a book on its own. It is setting up the next phase of the Empire’s story, asking questions that aren’t all answered by the novel’s end, and giving the reader a tiny glimpse at the Universe outside of Arrakis and the bodies that scheme there.

I wasn’t planning on reading Children of Dune right after finishing this one, since my to-read list is already out of control, but now I feel like I almost have to. The story has barely begun. And you, dear reader? If you haven’t read Dune yet, stop now, go find a cheap used copy, and read it immediately. It is one of those books that I had wished I had picked up earlier, since there are simply so many different things that have been adopted by pop culture from it- things I had never even noticed before. That and its a classic of Science Fiction, hands down. But then when that’s complete, you probably don’t need to read Dune Messiah, since Dune wraps up on a pretty good ending point, but if you chose to move on with the series, plan on reading #2 and #3 back to back. Otherwise you might feel like something is missing, and you might need to come back to this review in a few days and make some heavy edits…