You aren’t thinking or really existing unless you’re willing to risk even your own sanity in the judgement of your existence.

The desert planet of Arrakis has begun to grow green and lush. The life-giving spice is abundant. The nine-year-old royal twins, possessing their father’s supernatural powers, are being groomed as Messiahs.
But there are those who think the Imperium does not need messiahs…

This book is weird, and I’m not totally decided if it’s a good or bad type of weird.

Before I dig further into my thoughts, a bit of backstory: this is the third in the series, after Dune and Dune Messiah, and takes place about 21 years after the first story and 9 years after the second. It (shockingly) deals with the children of characters from the first book, and their place within their family legacy.

I loved Dune, but its first sequel was so-so. I read on because I heard this novel was a more complete story and was more entertaining than the transitional Dune Messiah. I’d give it that. 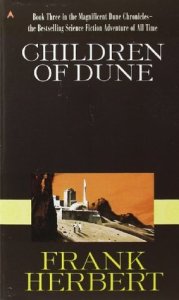 The good : this book had more action to it than Dune Messiah. More things actually happened, more plot lines were both explored and resolved, and there seemed to be a clear purpose to everything that was going on. Characters adapted and changed, consequences were felt, and a bunch of sweet sweet sandworms got ridden.

The bad : it got bizarrely convoluted. The story doesn’t really have a main antagonist to unite it. All of the conflict is between members of this powerful family, and the motivations that they have become murky and deceptive. The main character is also, unfortunately, not incredibly interesting until the very end when everything goes just totally off the rails.

The verdict : I was entertained for the most part, once the plot starting to move and an end goal was on the table. It concluded the story arc of the first three novels well, albiet bizarrely.

But will I read more of this series? Not any time soon. Frank Herbert himself wrote three more books (and then the expanded universe has a great deal more penned by others) but I think I’ll keep those on the backburner for now. This book just ended up being so strange that I’m not sure I even want to discover what happens next, especially since many of the characters that I really loved are no longer around.

Read this is you liked the first two and need some sort of resolution after Dune Messiah. Skip it if Messiah was a total disappointment for you. Also obviously skip if if you’ve read neither predecessor since freaking nothing will make any sense.

(I hear the Sci-Fi channel made a mini-series of the second and third books which fixed some of the book plot lines (and aged up some of the creepy child characters). I should find that… It also apparently has James McAvoy? Cool.)

3 thoughts on “Children of Dune”