With characteristic exuberance Tom named this curiously constructed house Castel des Tours saunz Nowmbre, which means the Castle of Innumerable Towers. David Montefiore had counted the innumerable towers in 1764. There were fourteen of them.

The Ladies of Grace Adieu and Other Stories

Following the enormous success of 2004 bestseller and critics’ favorite “Jonathan Strange & Mr Norrell, ” Susanna Clarke delivers a delicious collection of ten stories set in the same fairy-crossed world of 19th-century England. With Clarke’s characteristic historical detail and diction, these dark, enchanting tales unfold in a slightly distorted version of our own world, where people are bedeviled by mischievous interventions from the fairies.

There is no sequel to Jonathan Strange and Mr Norrell yet, which I remain quite grumpy about, but there is this short story collection which expands upon that novel’s world. Throughout the eight tales of Ladies, Clarke explores British magic as well as the Fairy realm, giving additional insight into the alternate history she put together in the previous work. 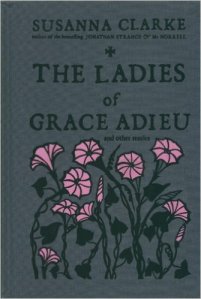 The stories vary in length, tone, writing style, and quality, and I admit there were some that I enjoyed far more than others- “Mrs. Mabb” and “Tom Brightwind” were particular high points for me. Though there is no overarching plot, there are themes that run throughout, including those of Fairy interaction and the relationship that women have with the magical world. Some stories feature individuals from history- Wellington and Mary Queen of Scots, and others still involve characters introduced in Clarke’s previous work.

There are narratives that feel somehow familiar, as if you’ve heard the story before, yet they are in a way different- darker in parts, but also somehow mundane. Clarke has a way of writing about her British magic as if it has always existed, and was the most normal thing in the world to her characters. That is not to say that these stories are consistently dry- on the contrary. The observations and characters are often quite clever, making remarks and observations in a very Austen-like way.

My disappointment, and the reason for a more average rating, is that the stories were a little uneven when it came to holding my interest. I expected more- even a single recurring character or unifying thread would’ve done wonders. It took me a while to get through this book because despite the fact that the stories occupied the same world, there was nothing else that bound them together or really compelled me to binge onwards to the next tale.

Have you read Jonathan Strange and Mr Norrell? And did you enjoy it? If the answers to both of those questions is yes, then read this book. The cameo appearances by a few of the familiar faces will mean much more, as will the world expansion in general.

If you have not read the aforementioned book, these stories may still entertain, but the sinister deceptiveness of the fairies, or the general relationship with magic will not mean as much. On the other hand, if you aren’t sure if you want to dive into Strange and it’s 800+ pages, this might also be a good stepping stone as the writing is very similar in pace.

Also, the illustrations are quite lovely (each story has one for it’s title page). Somehow I’ve neglected to mention those until now. Very nice indeed.

One thought on “The Ladies of Grace Adieu”