I found this over on Lunaris Blogs way way back and have had it sitting half-completed for ages. No longer!

It was quite interestin 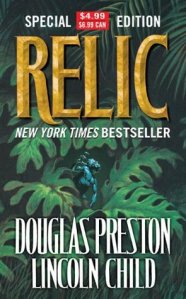 g to do, so if you haven’t gone through this one yet, consider yourself tagged!

Author you’ve read the most books from:
Alright, so I’ve read pretty much the entire Pendergast series by Douglas Preston and Lincoln Child. By my count I’ve gotten through 14/15 books (I haven’t grabbed the most recent one yet). That’s a bunch right there. I’ve also read some of their Gideon Crew novels (not as good), as well as a bunch of stand-alones. I can’t think of any longer series that I’ve kept up with, so this seems like a solid, and probably factually correct answer.

Best Sequel Ever:
Because it’s so recent in my mind – Bring Up the Bodies, by Hilary Mantel. Wolf Hall was good, but Bodies stepped it up. It’s also one of the few book duos I can think of where there are only two of them. Once you get into trilogies and longer series the “better sequel” question gets really muddy for me.

Currently Reading:
Fragile Things by Neil Gaiman. It’s a whole mess of short stories, and has been fascinating to work through.

Drink of Choice While Reading:
Coffee. But that’s sort of my drink of choice for existing.

E–reader or Physical Book?
Both. I have limited storage space, so I tend to physically keep only the books that either look really, really cool, or ones that I’m certain I will read again. Otherwise I get things from the library, or Kindle sales. Plus I travel a decent amount, so having things on an e-reader is just really, really convenient

Fictional Character You Probably Would Have Actually Dated In High School:
Probably Wade/Parzival from Ready Player One, because I was (and probably still am?) that caliber of obsessive geek, and because I basically spent most of my teenage years and early 20s living in a video game anyway. Thanks World of Warcraft!

Glad You Gave This Book A Chance:
I picked up A Discovery of Witches a few years ago, because I remembered it being really popular in the library I worked at. Vampire-related romances aren’t really my thing, so I was expecting another Twilight-level DNF, but I actually ended up really enjoying it. The author’s non-fiction background really shone through and I ended up finishing the entire trilogy in pretty short order.

Hidden Gem Book:
The Last Unicorn by Peter S. Beagle. Probably not that hidden, since they made a movie of it… though do people know there was a book first? Anyway, the book is incredible, and sad, and says a shocking amount about what it means to live forever. Really, really amazing.

Important Moment in your Reading Life:
When I was in 3rd grade my school librarian recognized that I was a kindred soul. She not only let me check out more books at a time than anyone else, but I was also able to get things from the middle school shelves (it was a K-8 school).

Just Finished:
How to be a Woman by Caitlin Moran. She’s crass, rough, sometimes disagreeable, but quite funny throughout.

Kinds of Books You Won’t Read:
I’ll read most things, but of major genres I’d say romance is my least-read by far. Especially stuff closer to the erotica side of the pool. I’ve picked a few things up due to book club choices and what not, and… well… pass.

Longest Book You’ve Read:
Goodread stats indicate that The Count of Monte Cristo, at 1276 pages, is the longest book I’ve ever read. Also on the 1000+ list are 11 other novels… which I’m going to list because the Goodreads stat export is fascinating. As you can see, I really like Stephen King and High Fantasy novels…

Major book hangover because of:
Speaking on long books (though only a mere 973 pages!)- The Pillars of the Earth. I read it for the first time when I was fifteen, and it was the longest “adult” thing I had ever read until that point, and I devoured it in 3 days. Epic history, a story that spans decades, romance, tragedy, art, and politics under the shadow of a cathedral. Once I finished I felt lost for weeks. I’ve probably read that book a half dozen times since.

Number of Bookcases You Own:
2 that are floor to ceiling, 3 more that are half sized.

One Book You Have Read Multiple Times:
As noted, I think I’ve read The Pillars of the Earth about 6 times. If we’re looking at series… well I’ve done more Harry Potter and LOTR re-reads than I can count, and I go through all of A Song of Ice and Fire every few years as well.

Preferred Place To Read:
Living room sofa. If I lay in bed I fall asleep too easily.

Quote that inspires you:
“All we have to decide is what to do with the time that’s given to us.” – Gandalf from The Lord of the Rings

Reading Regret:
I regret that I was really bad at logging all the things I read until a few years ago. Now I have trouble remembering everything I’ve picked up over the years.

Series You Started And Need To Finish(all books are out in series):
Discworld. I started the series for the first time a few months ago, with the goal to read one a month. I’ll be done in like 3 and a half years…

Three of your All-Time Favorite Books:
The Return of the King (if we’re gonna split up that series), The Count of Monte Cristo, Harry Potter and the Prisoner of Azkaban, The Pillars of the Earth. Yes, I listed four. Too bad.

Unapologetic Fangirl For:
Star Wars. Anything Star Wars. It’s the fandom I’ve followed the longest. I read EU novels almost exclusively to get through middle school, and to this day have mountains of memorabilia and a dog named after an Ewok.

Very Excited For This Release More Than All The Others
The script to Harry Potter and the Cursed Child for sure. I’ve had that on pre-order since about 20 minutes after it was announced.

Worst Bookish Habit:
Compulsively price checking to get good deals on stuff I want to keep. Is that weird? I make lists of the Kindle prices on things I want before I go to the used book store so that I can save money. That’s probably not that weird. I read like 4 books at a time? Does that work. I’m told that is strange.

X Marks The Spot: Start at the top left of your shelf and pick the 27th book:
The Gunslinger by Stephen King. I keep meaning to finish the Dark Tower series, especially with a TV Show in the works… but I have only read the first three, and those were back about a decade ago. I’d have to start all over and I’m already working my way through half a dozen other series at present.

Your latest book purchase:
Hamilton: the Revolution. It’s basically a huge pretty scrapbooks of pictures and lyrics and comments about the musical. And I mean really pretty.

ZZZ-snatcher book (last book that kept you up WAY late):

Probably A Darker Shade of Magic. I was about 75 pages from the end at the point I normally try and force sleep upon myself. Nah, didn’t happen. The three extra cups of coffee the next day normalized everything. No big deal.

5 thoughts on “The A-Z Book Survey”