I needed to say something. Something romantic! Something to sweep her off her feet.
“You’re like a potato!” I shouted after her. “In a minefield.”

Babylon Restored, the old borough of Manhattan, has possibilities, though. Ruled by the mysterious High Epic, Regalia, David is sure Babylon Restored will lead him to what he needs to find. And while entering another city oppressed by a High Epic despot is a gamble, David’s willing to risk it. Because killing Steelheart left a hole in David’s heart. A hole where his thirst for vengeance once lived. Somehow, he filled that hole with another Epic—Firefight. And he’s willing to go on a quest darker, and more dangerous even, than the fight against Steelheart to find her, and to get his answers.

In the second novel of his Reckoner’s series, Brandon Sanderson picks up not too long after the culmination of the previous book. A big bad is dead, but more bads are out there, and the Reckoners need to stop them.

Like Steelheart, this is narrated in first person by David, a Reckoner and Newcago resident looking to fix the world. David, who achieved his lifelong goal in the previous book, is now battling with himself over his future and his feelings, and a trip to New York City for a mission only causes more confusion. New York (now “Babylon Restored”) is home to a new cell of Reckoners who don’t know the full story behind their organizations leader, resulting in more complications than you can count. 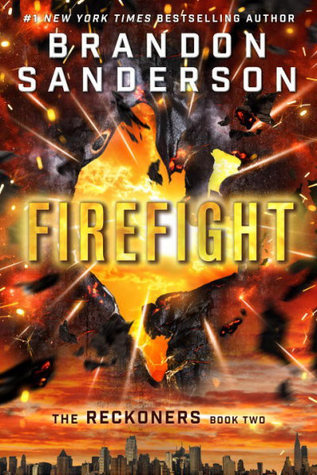 the cast members from Steelheart return, while others remain behind, and even more are introduced. I was glad to see that characters both old and new were fleshed out to a greater degree, resulting in both cooperation and conflict on multiple scales as the story unfolded.

With the state of the world and the introduction to David already establish in the previous book, this sequel is able to jump right in to the action and carry forward with the overarching meta-plot that Steelheart set up. What are Epics? Where did they come from? How do you stop them? Firefight twists between deceptions, revelations, and even romance as the series spins further towards resolution.

It’s not the greatest series of all time, but it is loads of fun and wonderfully inventive so I echo my recommendation for Steelheart- “Did you also enjoy Percy Jackson, or other types of adventurous books with teenagers doing insane things? Like fighting essentially the Evil Brotherhood of Mutants? Pick this up.”

Of course, with the caveat that you should probably read Steelheart first. This one won’t make much sense otherwise. But if you’ve read the previous book and are looking for more adventure of the same ilk, continue on with Firefight. You get a plot that opens up the post-Calamity world, a big mystery, and even a love story for you romance fans.

Firefight ends on more of a cliffhanger than Steelheart did, which basically forces me to read the final novel – Calamity. So… you know what I’ll be doing..