Without knowing it, he had constructed a gigantic vertical zoo, its hundreds of cages stacked above each other. All the events of the past few months made sense if one realised that these brilliant and exotic creatures had learned to open the doors.

When a class war erupts inside a luxurious apartment block, modern elevators become violent battlegrounds and cocktail parties degenerate into marauding attacks on “enemy” floors. In this visionary tale, human society slips into violent reverse as once-peaceful residents, driven by primal urges, re-create a world ruled by the laws of the jungle.

The 1975 novel by J.G. Ballard is a satirical look at what happens when the very privileged experience what is essentially class warfare while in self-imposed isolation. Without oversight or anyone to answer to they become utterly savage, taking problems into their own bloody hands and attempting the redefine the social order of their high rise complex. 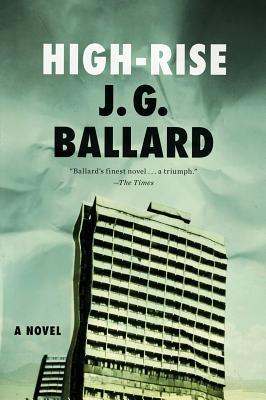 The book goes dark- very dark. What starts as a small conflict between those with children and those without turns very quickly into a war for resources and amenities when the power grid starts to glitch. The residents, who are all well-to-do professionals, end up stratifying even more as a result, with high flowers hoping to subjugate the lower ones.  In the span of only a few months these posh dwellers living just outside of London become depraved in nearly every possible way from the hedonistic, to the taboo, to the overly violent.

Yet, the book is only about 200 pages long, and covers this descent to horror with a speed so blistering that it is difficult to fully suspend disbelief. Even looking through the satirical lens, the motivations for why these people don’t simply pack up their car and leave are present, but not universally plausible. I can understand why the primary three protagonists (Wilder, Laing, Royal) remain behind to engage in the madness, but they seem to be more exceptional cases driven by pride, desperation, or presumed mental illness. The fact that hundreds of other, once level-headed residents put up with nightly raids, urine-filled stairwells, and the literal enslavement of one another, without a single person ever informing the authorities, is just difficult to believe. How have outside family members not grown concerned? What about the jobs these residents work at?

But of course, the cops showing up, or a frazzled sister or parent investigating after the very first incident would make for a far less interesting story, so perhaps I am focuses on that negative too much. It is just difficult to reconcile what is going on within this tower with the fact that none of this is forced. It is not a post-apocalyptic society. The residents are not trapped in the tower unable to leave- it’s 1975 London. Everything outside is carrying on as normal. The isolation and the stress is artificial. Ultimately, the lack of a clear, unifying cause for it all kept me from fully buying in to the situation. The story is fascinating, inventive, and entertaining, but the unbelievably prevents me from scoring it any higher.

The film version High Rise is just as dark, and follows the plot of the novel somewhat faithfully. It focuses even more narrowly on Laing, Wilder, and Royal than the book did, perhaps understanding that the likelihood of all residents acting in such a way is implausible. You see more empty parking lots, more people fleeing the situation. The book makes it seem that most dwellers are in this conflict together, and that no one would dare leave the social experiment unfolding. The film shows a clear abandonment, but contrasts it with the protagonists who psychologically cannot give up due to a need for control and validation.

The film is visually interesting, contrasting decadent parties with a society in the middle of a collapse. Rooms that once housed powdered-wig soirees are now piled with trash and rot, though the residents carry in with their dress and makeup as is oblivious to the grotesque lack of sanitation around them.

Unfortunately the visuals are the best parts of the film. While the provocative overarching theme is still there, the script takes different liberties that don’t always make sense. In fact, I’m not sure how easy it would be to follow this film if you had not read the book. Where the novel gets inside the characters heads with frequency, the film utilizes voice over only a few times. Various incidents take place, but the rationale or even repercussions are not explicitly defined. For instance, an event that takes place in a swimming pool and jump starts much of the conflict is barely explained on film. There is far more show, rather than tell, which is an interesting narrative tactic in a story centered around internal motivations and societal expectations.

Should I Read or Watch This?

If you’re looking for a truly bizarre novel that also happens to be quite short, I would recommend the book. It has its flaws, but the story is so mind-boggling that it still manages to entertain even with its implausible bits.

As for the film? I’m not sure how well one would be able to follow it haven’t not read the book. It is very visually stunning with its treatment of both the decadent and grotesque, but the actual narrative is less obvious, and the motivations of the residents even less still.

2 thoughts on “High Rise : A Book, A Film, A Strange Experience”