Let’s Read This Thing : War and Peace is my attempt to jot down notes and reactions to this monstrous novel that I’m reading for the first time. Spoilers might happen, no promises. But they are probably kind of vague? 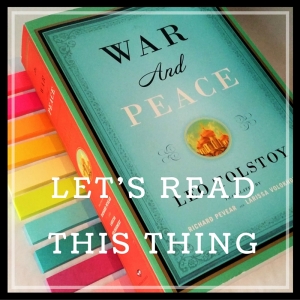 So much is happening! So many things!

Part 5 of Volume II is a turning point for many of the characters, a coming together of desires and ideologies that gets absolutely blown to pieces. It’s one of the most drama-filled sections thus far (and apparently someone wrote a musical about it?) and one of the fastest that I’ve been able to devour.

Natasha and her scandal are at the center of the section- bored of waiting so long for Andrei, she gets pulled into the orbit of those horrible, terrible Kuragins. Anatole tells the young girl all the things she wants to hear, and Helene encourages it all, despite the fact that her husband is dear friends with Andrei and has long been close to the Rostov family.

The Kuragins are like vice incarnate. They seek wealth, fame, and act like wrecking balls who will plow over anyone who impedes their quest for pleasure. Natasha at this point is still very pure and childlike. Before all of this, she is hurt by the scorn she feels from the other Bolkonskys who do not accept her with open arms. She has juvenile expectations of what life should be like, and mourns when those are not met. As a result, she falls prey to Anatole and his charms. It ruins everything.

The life of Natasha Rostov changes from her failed elopement. Her engagement is called off, her self-worth is destroyed. Only Pierre is able to bring her joy, but he is ensnared by the sister of the man that took advantage of her. It’s a painful situation, made worse by the social expectations of how one should act, respond, or forgive.

The end does bring hope though, as some feelings are finally being realized in this calm before the storm . Nearly seven years have passed over the previous 600 pages; characters have grown in maturity, in fortune, and in outlook on life. Volume II closes with a comet and a look to the sky- a portent of the continued changes on the horizon.