The Iron Fist wants only honor in death.

Danny Rand has buckets of money, control of his family’s corporation, lots of cool super friends, and some insane kung fu powers thanks to a Dragon in the mystical city of Kun’Lun. But what is the Iron Fist? Who receives the power, and what evil forces are out there trying to defeat it? 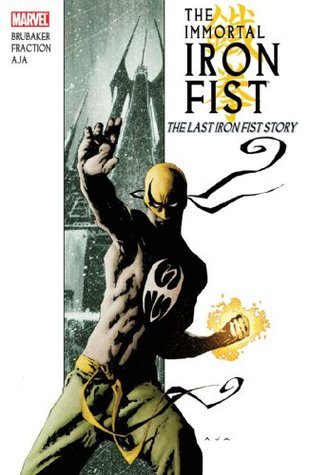 You don’t need to have any exposure to Iron Fist in order to pick up this book. It fills you in on Rand’s backstory, it shows his connections to several of the other Defenders characters, and it places him within the greater Hydra threat context. The action scenes were well done, and I enjoyed the muted colors combined with the more graceful movements of the Iron Fist. He isn’t a huge brawler, and I liked that the panels reflected that type of physical style.

I also liked the different flashbacks that gave an extended backstory on a power that has literally transcended the centuries. Seeing how each Iron Fist used their gifts was an interesting commentary on power and how individuals decide to use it.

There strangely isn’t a whole lot about Danny Rand himself. You learn about the power, and some of its past users, but you don’t dive very far into who he actually is as a person. For future volumes maybe?

Are you like me, a compulsive binge watcher of the Netflix Marvel programs who wants to know more about the characters involved? Did you have no idea that Iron Fist was a thing but are just really intrigued for the upcoming series and want to be able to catch all those sweet, sweet easter eggs? Then yeah, read this. It was a great primer to the character and even brought in several allies that will also be appearing on screen (Luke Cage, Misty Knight, Colleen Wing, etc.). I look forward to checking out further additions.