Movies are my second love; my secondary passion behind the written word. I don’t review films often (outside of the yearly Oscar rush) but on occasion, a feature pops up that I must share with the world. Okja, a sci-fi social satire distributed by Netflix, is one of those titles.

Netflix has been crushing it with their original television programming. Daredevil, House of Cards, and Orange is the New Black have invaded the cultural dialog, and those are only three examples out of dozens. With television success assured, the company now looks to feature films, betting on titles like Okja or The Discovery (as well as a multi-film contract with Adam Sandler…) While The Discovery underwhelmed, Okja, by Bong Joon Ho, is a film that I’m still thinking about days later. 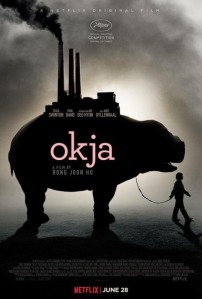 The film is science fiction, but very much rooted in the factual realities of the present day. Earth’s population is growing, and a food crisis is imminent. Mirando, a major international corporation with a tarnished past, thinks that they have the solution. Okja is their savior. Or rather, one of twenty-six possible saviors. She is a super pig, a genetic anomaly that grows to the size of a hippo, eats very little, and produces even less waste. She and her brethren will feed the world while tasting great and being 100% natural and GMO-free. Or so Mirando says.

The narrative progresses from the super pig announcement, given eccentrically by Tilda Swinton playing a double role as twin Mirando sisters. One is the definition of corporate greed and corruption and is utterly unapologetic about it. The other, white-wigged Lucy, seeks to improve the company image but is just as duplicitous in her actions. Swinton excels as always, giving appropriately bizarre mannerisms to both roles in a film filled with the strange and off kilter. I’d say she was nearly unrecognizable as Lucy, but the film’s bar for offbeat acting was set high by Jake Gyllenhaal. As “the face” of Mirando’s super pig project, his performance as nature host Johnny Wilcox is both manic and disturbing. It is truly a film of bizarre but effective acting, both from the aforementioned two and from the rest of the ensemble.

I, of course, cannot mention the acting without talking about Seo Hyun Ahn, the thirteen-year-old actress who stars as Mija, Okja’s owner and best friend. She seldom speaks beyond calling for her beloved pig, but her passion, grit, and emotion carry the movie. She builds a real connection with a CGI creature, and viewers root for her from start to finish as she embarks on her journey to save her childhood companion.

That journey, the quest to keep Okja in her idyllic home in the mountains of South Korea, is rife with commentary on real issues that affect our world. The movie is science fiction, but only barely. The super pigs are imagined, but entirely plausible with modern science. Mirando, a multi-national, could be any number of corporations that exist today- businesses that strive for profit above all else and will engage in duplicitous or unethical means to chase the extra dollar.

Bong Joon Ho’s story addresses that greed through the absurd characters of the Mirando employees but also dives deeper to expose the livestock industry and the meat production process in particular. I’ve seen more than one review of this movie where the writer expressed a desire to cut back on animals products after seeing it. The Animal Liberation Front makes an appearance as attempted heroes, but they too have faults in their methodology. Mija and Okja must navigate a world of greed and shady intentions to find freedom, but even they are powerless to find a truly happy ending for all.

Okja is a provocative narrative and a story quite outside of the box. It is no surprise that Netflix, rather than a major movie distributor, decided to back the project. I’ve seen few films like it, and even less that made me seriously rethink some of my life choices. It’s incredible how a movie featuring eccentric caricatures, a CGI centerpiece, and a central role that speaks no English can be so affecting.

Okja is streaming on Netflix.